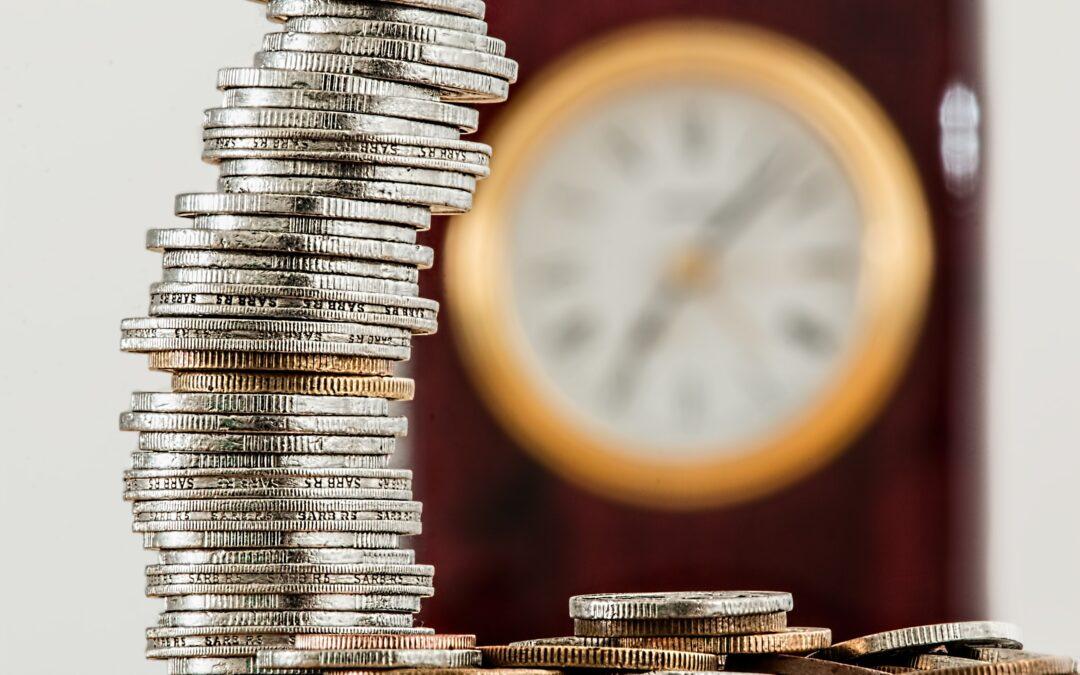 According to financial commentary Fisher Investments UK analysts read regularly, there are allegedly two main ways rapid inflation harms equities. One generally presumes it to be an economic negative, hurting consumer spending and raising businesses’ costs as prices rise—triggering a general malaise. We think this view stems largely from memories of stagflation during the 1970s. Another theory holds higher inflation spurs higher interest rates, which some commentators we follow argue reduces shares’ attractiveness. If yields on less-volatile government debt rise, they surmise, investors won’t be as willing to endure equities’ price swings. But, in our view, this lacks evidentiary support and underrates businesses’ ability to adapt to rising prices and rates.

Based on our historical analysis, neither high nor rising inflation alone is a major negative for equity markets. Inflation has averaged 5.2% y/y in the UK and 3.7% in the US since 1960.i These averages result from a mix of low rates—including what we have seen since 2008’s financial crisis, overall and on average—and much higher, double-digit rates seen in the 1970s.ii Today, inflation remains ultra-low, averaging 1.3% and 1.5% y/y in the UK and US, respectively, over the last two years.iii It would therefore take a significant acceleration for runaway inflation to emerge. Whilst that is possible, it seems unlikely now. Even if it did occur, it probably wouldn’t appear overnight.

Moreover, gradually accelerating prices aren’t usually bad for equities. Most periods of rising inflation have occurred alongside positive returns. Based on the UK Consumer Price Index (CPI, an official measurement of prices in a broad basket of consumer goods and services)—used here for its long historical dataset—and MSCI UK returns in pounds, Exhibit 1 shows times when inflation rose two percentage points or more, capturing major periods of price increases since 1969. More often than not, significant inflation acceleration alone didn’t prevent positive returns. During three of the four periods of double-digit inflation in the 1970s, returns were positive. 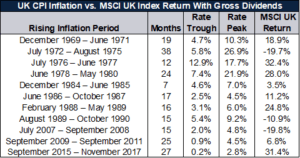 Source: Federal Reserve Bank of St. Louis and FactSet, as of 15/03/2021. UK consumer price index, year-over-year percent change, and MSCI UK Index returns with gross dividends, December 1969–December 2020. Presented in pounds for its longer history. Currency fluctuations between the pound and dollar may result in higher or lower investment returns.

Exhibit 2 tells a similar tale for the US. Several periods of double-digit inflation didn’t prevent positive returns for US equities. According to our research, the UK and US experience applies to developed markets generally.

Exhibit 2: Rising Inflation Isn’t Automatically Bad for US Shares, Either

Source: Federal Reserve Bank of St. Louis and Global Financial Data, as of 15/03/2021. US consumer price index, year-over-year percent change, and S&P 500 total returns, December 1925–February 2021. Presented in US dollars for its longer history. Currency fluctuations between the US dollar and pound may result in higher or lower investment returns.

Inflation often coincides with economic expansion, favouring share-price appreciation, according to our research. Rising prices are frequently a side effect of economic growth—they signal more money is moving through the economy in the form of businesses investing and consumers spending. That means higher corporate profits—which is what we think shares care about the most. Many businesses also have the ability to raise prices and/or manage costs, through things like substitution of raw materials and inputs. They may also have the ability to use their clout to prevent big supplier-price increases. Hence, inflation itself isn’t necessarily an automatic risk to equities.

An oft-cited case we have seen of high inflation’s market damage is the 1980–1982 US bear market (a fundamentally driven equity market decline exceeding -20%). Inflation had risen from 4.9% y/y in December 1976 to 14.8% in March 1980.iv That is a very extreme scenario. But for most of this period, galloping inflation didn’t send equity markets reeling. In our view, this is a prime example of monetary policymakers’ prescription for high inflation being the problem—not high prices themselves.

To fight inflation, central bankers typically raise short-term interest rates. However, if central bankers overshoot by raising short-term rates above long-term rates, this causes the yield curve (which plots interest rates across a given range of maturities from the same issuer) to invert. Since banks borrow at short rates and lend at long rates, profiting from the spread, we think an inverted yield curve implies little incentive for them to make new loans. That causes credit to lock up as businesses can’t access money to invest—and recession (a broad-based decline in economic activity) typically follows.

This is what happened after US Federal Reserve (Fed) Chairman Paul Volcker took his post in 1979. Under his leadership, the Fed raised rates aggressively to quell inflation. The Fed’s benchmark overnight interest rate (known as the fed funds rate) rose from 10% in January 1979 to 20% in April 1980.v After several months of easing, the fed funds rate soared from 9% in July 1980 to 22% in January 1981—and would remain in double digits until September 1982.vi These moves caused America’s yield curve to invert deeply, with the 10-year to fed-funds-rate spread hitting -9.6 percentage points in December 1980—a record.vii US loan growth slowed dramatically from 17% y/y in September 1979 to just 6% in December 1982.viii

The timeline suggests the Volcker Fed’s severe actions to tame high inflation led to the market downturn. Even though inflation had been high and rising throughout the late 1970s, US equities entered a bear market in November 1980.ix By that point, the yield curve, already inverted thanks to the Fed’s rate hikes, signalled trouble. In our view, forward-looking shares were anticipating the coming recession, which began officially in July 1981.x

Inflation is a crucial thing for retirement investors to weigh, in Fisher Investments UK’s view. But we think it is important to understand that equities can offer growth and adaptability that help cushion your portfolio against rising inflation rates. That is a key reason you may wish to own equities in your portfolio. So rather than fear rising prices now—before there is any real sign of them—we think it is important to realise rising prices alone usually aren’t a big threat. For equities, we think the risk is more in how policymakers respond.

x Source: National Bureau of Economic Research, as of 15/03/2021. Dating for US Business Cycle Expansions and Contractions.