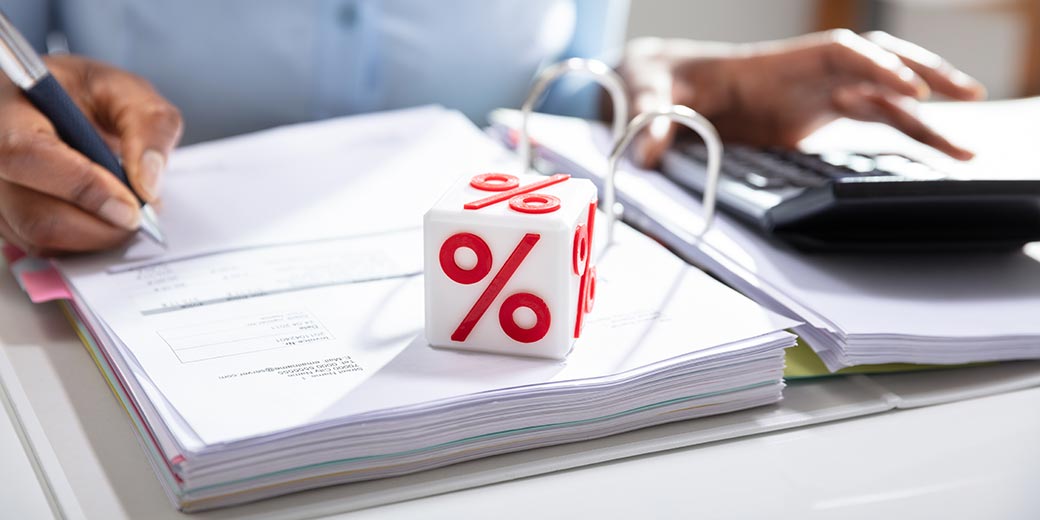 As several countries announce giant packages of tax relief and increased public spending to cushion their economies from the impact of COVID-19 containment efforts, most financial news commentary we have seen presumes these governments will pay for these efforts by issuing more debt. In our ongoing review of financial news, we have seen this give rise to a new concern amongst commentators: the potential for higher debt to negatively impact these countries’ credit ratings, making it more difficult for them to borrow. Whilst it is entirely possible that some countries—even major ones—get downgraded, we think a brief look at history shows credit ratings don’t have as much influence on interest rates or investors’ willingness to purchase government debt as many seem to presume.

The most-watched credit ratings are issued by three internationally recognised American companies: Moody’s, Standard & Poor’s and Fitch. These companies assign debt issuers (primarily national governments and corporations) a grade based on their perceived creditworthiness—the likelihood that they will continue paying interest and principal due without interruption. In our experience, many investors presume that a higher credit rating corresponds to lower interest rates, making it easier to issue new debt. In our experience, when credit ratings are at risk of getting cut, many financial news commentators warn interest rates will rise and borrowing will become more difficult, raising the risk of default.

Yet the recent history of credit rating downgrades doesn’t support this claim, in our view. As Exhibit 1 shows, several major nations have been downgraded from the top rating by at least one of the three main agencies. Some have been downgraded multiple times. Yet in none of these examples did the country’s 10-year sovereign yield soar over the next year. Some rose modestly. Many fell. In our view, this is evidence credit ratings don’t dictate fixed interest market direction.

Exhibit 1: Sovereign Debt Yields Before and After Credit Rating Downgrades 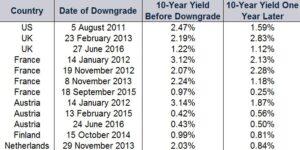 Source: FactSet, as of 27/3/2020. 10-year benchmark government debt yields on the last trading day before the downgrade date referenced and one year after that date.

To us, it makes sense that sovereign yields wouldn’t soar following a downgrade. Credit ratings are simply statements of opinion. Standard & Poor’s actually cited that as its defense against US legal action over ratings it assigned to securities prior to 2008, calling its own statements “puffery”—an exaggeration, or hype, for promotional purposes.i These ratings are not objective, as evidenced by the three agencies’ tendency to have conflicting viewpoints. Rather, they are each agency’s interpretation of a nation’s finances, economic growth prospects, political developments, current events and other factors. Crucially, all of these items are widely known public information—the same information available to investors globally.

We think reasonably liquid fixed interest markets, like equity markets, are efficient—prices rapidly reflect all widely known information. Therefore, we think it is reasonable to argue that whenever an agency downgrades a nation, markets had already priced in the developments that led to the rater’s decision. In 2011, when Standard & Poor’s downgraded America’s credit rating, they cited political disagreements over the budget and funding of government spending—a debate that had preoccupied investors for weeks.ii When Standard & Poor’s and Fitch cut the UK’s credit rating in 2016, they cited Brexit and the various analyses suggesting it would impede the government’s ability to borrow from international investors—another widely known issue, given the repeat discussion of the Treasury’s and Bank of England’s forecasts throughout the Brexit debate.iii The downgrades of France, Austria, the Netherlands and Finland during the eurozone’s sovereign debt crisis occurred after more than a year of worldwide chatter about the potential for the currency union’s collapse. We think it is fair to say none of this was new information for investors.

In our view, markets look forward, not backward. Credit ratings are statements of opinion about past events and speculation about what will occur. We think markets price all of this and then move on, with credit markets moving on the same fundamental drivers as always: supply of, and demand for, long-term government debt. Irrespective of credit ratings, individual and institutional investors including banks and pension funds have a high demand for stable government debt. Credit ratings don’t affect the depth and liquidity of a country’s capital markets or even a country’s ability to service its debt. That depends, in our view, on how interest payments compare to incoming tax revenues. In many countries today, long-term government interest rates are near historic lows, which we think should enable governments to pay for these coronavirus stimulus packages regardless of what credit ratings agencies might opine on the matter.

Where will the Market go next? Investors are panicking. For those who invest £250,000 or more, don’t miss our latest report and ongoing updates.