Much of the academic literature we have reviewed posits demographics determine long-term economic growth. Rising populations mean more demand for just about everything: food, housing, clothing, energy, medical care, services—you name it. It also means a rising workforce, providing the ability to meet that demand. Hence, if population growth falters, we find stagnation fears typically rise. Today, with Europe’s working-age population declining, many pundits we follow fear the Continent is falling into this trap, making slow growth inevitable—and knocking equity markets in the process. But in our view, demographics don’t foretell future economic growth—nor are they market drivers.

The main quibble we have with theories arguing demographics threaten markets: Population trends are exceedingly slow-moving. After rising through 2009 and topping out at just above 334 million, the EU’s working-age population has been falling—down to 327 million last year.i Whilst a fact, these developments probably aren’t surprising many investors, businesses, policymakers or pundits. Birth rates and life expectancies typically shift glacially. Investors and pundits know of them long in advance. Markets, by contrast, move quickly, pricing in widely known information near-instantaneously, in our view. If you have ever seen how quickly equity prices react to announcements like mergers and acquisitions or earnings reports, you have likely seen a microcosm of this phenomenon. So, to the extent slow-moving demographic shifts are real, we think markets likely factor them into prices long before they materialise.

From year to year, demographic changes are unlikely to be large. Any noteworthy demographic shift and related consequences would probably play out over a much longer period. But in our view, markets care about what affects economics: political and sentiment equity-demand drivers over the next 3–¬30 months. We think factors beyond roughly 30 months are outside the market’s ability to assess, as too many variables could shift.

Further, whilst market participants may know and weigh demographic forecasts, long-range forecasts are far from certain to become reality. For example, as it does twice annually, in its April 2005 World Economic Outlook, the International Monetary Fund (IMF) extrapolated current trends in economic growth, spending policy and more to project net debt (debt not held by the government itself) for many major nations. It estimated German net debt would amount to 70.3% of Gross Domestic Product (GDP, a government-produced measure of national economic output) by 2010, up from 2004’s 66.1%.ii Instead, the ratio fell to 62.1%. The IMF projected French net debt would fall from 55.4% of GDP to 53.3%.iii It rose, hitting 73.6% in 2010. These problems aren’t just in Europe: The IMF foresaw Japanese net debt rising from 2004’s 82.0% to 111.2%.iv In actuality, it hit 131.1% of GDP in 2010—just a bit off. We aren’t picking on the IMF—just noting that in April 2005, when they made these forecasts, no one foresaw the 2008–2009 global financial crisis and governments’ responses, which threw off most budget assumptions. The same holds in forecasting almost any development beyond a couple years out, in our view.

Hence, we think you can’t just pencil out demographic trends forever into the future. They aren’t destiny. Population trends can shift. Birth rates change. Immigration can also breathe new life into countries’ populations. Moreover, whilst working-age population definitions default to those aged 15 to 64, folks are working longer as lifespans rise. Those 65 and older are among the fastest-growing groups of workers!

But even if the workforce doesn’t grow, workers can also become more productive. Technological advancement allows people to do more with less. To see how, take apart components to wealth generation and look at them separately: labour, capital, technology and resources. Whilst labour is one input into production, its quantity alone doesn’t say anything about GDP. Technology—like factory automation—can allow fewer workers to produce more goods.

Exhibit 1: Since Reunification, German Manufacturing Output Is Up, Employment Is Down 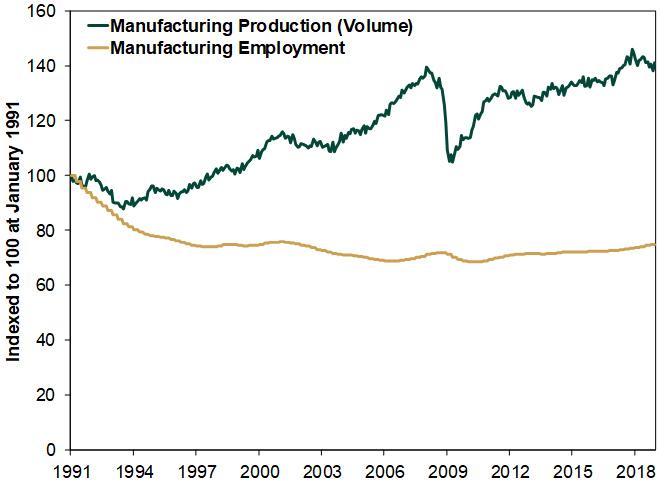 This is just one example. Multiplied across sectors and industries, though, we think it shows why extrapolation of population trends isn’t too telling for what most influences economic growth in the here and now—much less decades hence.

Demographic considerations can be interesting to think about and naturally invite speculation. But we think their economic and market influence in the short to intermediate term is likely swamped by other factors. The economy’s normal ebb and flow, political drivers helping or hindering that and sentiment—prevailing attitudes—towards it all figure more prominently, in our view.

Interested in planning for your retirement? Get our ongoing insights, starting with your free copy of Your Net Worth.

iSource: Federal Reserve Bank of St. Louis, as of 24/10/2019. Working-age population aged 15–64: all persons for the European Union, Q4 2009–Q4 2018.
iiSource: IMF, as of 08/11/2019. “April 2005 World Economic Outlook,” Chapter 1, page 13. Net debt figures as a percentage of GDP for Germany, France and Japan in 2004, the last complete year as of the document’s publication and forecast figures for 2010, the latest date included in the outlook. Actual net debt percentages sourced from IMF DataMapper, https://www.imf.org/external/datamapper/GGXWDN_G01_GDP_PT@FM/ADVEC/DEU/FRA/ITA/JPN.
iiiIbid.
iVIbid.